CREAID | The need for a new Kaxxarizzi for the newly built sacristy at St Paul’s Shipwreck Church
14962
post-template-default,single,single-post,postid-14962,single-format-standard,ajax_fade,page_not_loaded,,qode-theme-ver-9.5,wpb-js-composer js-comp-ver-5.0.1,vc_responsive 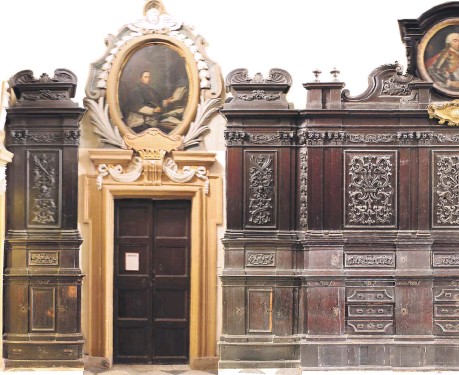 Posted at 12:13h in Wood by mcamilleri 0 Comments
0 Likes
Share

According to a heartfelt plea that was filed with the Curia dated 28 October 1730, it appears that the clergy at St Paul’s Shipwreck Church had grown considerably “…che potesse con maggior commodo servire al numeroso clero” i. This brought about a paralleled increase in the volume of vestments, decorations as used for the church and by the confraternities, so much so that as expressed in the same plea, all was being stored in a haphazard manner “…mentre oggi la robba della chiesa e delle sudette compagna si trovano disjierji e conferrati a duera parti…” ii. The wish for the newly built sacristy to be furnished as appropriate in order to serve the ever increasing requirements, was thus made clear by the Pauline community “che avendo per il proprio commodo fabbricata li sacristia si ritrovo adesso in preciso necesita di fare gli armarji e casse” iii. It was also deeply felt that without such a construction, the newly built sacristy would have remained incomplete “…per poeter fare la Guardarobba et Armarji sudetti senza la quale l opera restarebbe imperfetta” iv. This same plea also contains requests for funding to cover the costs involved for the procurement of material and other expenditures, as well as to cover labour costs of carpenters and other workers. In fact, as one can find evidence of in the same document, there was a hopeful wish that as the Grandmaster helped greatly in the funding of the new sacristy building, he would do the same for its furnishings “la generosa pieta di S.A.S. si come contribui la maggior parte della spesa delle Sacristiji” v. Further monetary contributions were made available from the yearly offertory made in the same church as well as from the clergy and confraternities.

State of preservation and interventions undertaken

Studies and analysis carried out on the finishes suggested that the Kaxxarizzi were originally painted over but changes occurred throughout their use as this finish layer was removed and other multiple layers applied, which altered drastically the cabinets’ appearance. Evidence suggests that such redecoration was indeed desired at the time and not brought about through necessary maintenance.

It was deduced that the yearly application of a varnish, most often consisting of a concoction of oil and resin, was common practice. This mixture at times also contained brown and/or black pigment.

The traces of pigment that were uncovered aided in the deduction of the original appearance of the Kaxxarizzi as designed. This was conceived to be a noble and majestic decoration through the use of two distinct colours. The background was noted to have been given a reddish hue, almost orange brown in colour, whereas the sculptural motifs were painted in a dark brown shade. The orangebrown pigment, when tested, relieved the presence of minium together with iron oxides, whereas the brown pigment contained traces of magnetite and other iron oxides.

The Kaxxarizzi were also subject to structural changes. Major damages were also found to be the result of wood boring insect infestation, excessive loading causing structural deformations and lack of appropriate and regular maintenance.

structure. The historical and artistic importance of this baroque furniture required the professional intervention of conservator Josef Aquilina who, together with his team, led the project for the conservation and restoration of the same which included scientific and historic research, condition assessment and project proposal, implementation of conservation and restoration measures and treatments. Josef Aquilina, who studied in Italy and graduated as a wood conservator and restorer in 2001, serving at the time as Conservation Coordinator within the Ministry, was helped by members of the Works Department, namely Marco Abdilla, Richard Bartolo and George Ciantar for the implementation, personnel from Heritage Malta’s Diagnostic Science Laboratory for the scientific research, Perit Claude Busuttil for historic research and Perit Mireille Fsadni as Chief Architect in charge of Rehabilitation Projects Office.

The sole aim of the treatment was to safeguard the wooden Kaxxarizzi from further deterioration and prolong its existence “with a view to transmitting it to the future” vi. Apart from this basic principle, the conservation intervention was carried out with total respect to the historicity and authenticity of the cultural heritage object. It was then decided to return the Kaxxarizzi to their supposed original finish through the application of coloured paints in a two tone scheme.

This timely and attentive intervention was not only a means of reverting back the damage suffered through the years but reinstated also the artistic and historic value and dignity of the Kaxxarizzi.